Author of messed up love stories

Okay, I’ll admit it. I really like making lists. What do binge-worth TV shows have to do with my book or even books in general? Nothing, apart from the fact that most of them are based on books. But I binge-watch a lot of shows. It’s my downtime. My escape. I used to be a movie buff, but then TV shows surpassed movies they became my obsession. I love sitting down at the end of a day and getting lost in a good show. Almost as much as I love getting lost in a good book.

Just like with my top reads of 2017, this list isn’t compiled from TV shows which came out in 2017, but rather, from shows I watched in 2017. And, also like my list of top reads, it is a mixed bunch, filled with different genres. I like to mix things up. Sometimes I feel sorry for such software as Netflix, or Goodreads, or Spotify, anything which tries to recommend more things based on my interests. They have their work cut out for them.

So here is a list of the most binge-worthy shows I watched in 2017 in no particular order because in this case, I can’t choose favourites.

I have included where to watch them (in New Zealand) and also some similar shows.

“Set in a dystopian future, a woman is forced to live as a concubine under a fundamentalist theocratic dictatorship.”

This one really isn’t a surprise. I think it would be on the top TV shows lists for a lot of people. It even just won the Golden Globe for Best Television Series – Drama.

I read the book first. And as much as it pains me to say this, I enjoyed the TV series more. We got to see more of the world. We got to understand exactly how they ended up in this fucked up mess.

Similar Shows: Alias Grace (Netflix) A show based on a book by the same author.

A recently released ex-convict named Shadow meets a mysterious man who calls himself “Wednesday” and who knows more than he first seems to about Shadow’s life and past.

This show is crazy insane. I’m not sure how to describe it. Basically, the old gods (think Anubis, Queen of Sheba) are at war with the new gods (think Media, Technology). That’s all I can really say. Emily Browning was amazing. Watch this show just for her.

A chronicled look at the criminal exploits of Colombian drug lord Pablo Escobar, as well as the many other drug kingpins who plagued the country through the years.

I didn’t think I would watch the third season of Narcos. Pablo Escobar was dead. What was the point?

The point was everything that happened in season three. Not for people who are sensitive to violence, season three knocked things up a notch or two. And because of the sub-titles, it isn’t a show you can be distracted from.

Similar Shows: Peaky Blinders (Netflix) Sons of Anarchy (Netflix) Boardwalk Empire etc, as they are both shows based on crime gangs, although set at different time periods and countries. 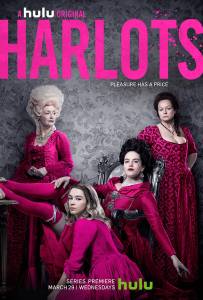 Brothel owner, Margaret Wells, struggles to raise her daughters in London during the 18th century.

I’m not sure why this show hasn’t received more attention. It is brilliant. The acting, the storyline, the costumes and set. I adored it. It changed my view a little of what I thought it was like to be a woman of ‘ill-repute’ in the 18th century. It is written and directly entire by women and you can tell. I can’t wait for the second season, hopefully coming out later this year.

An alcoholic man lives in a perpetual stupor while his six children with whom he lives with cope as best they can.

A friend told me I should watch this show and I didn’t listen. For a couple of years, I didn’t listen and then this year, while scrolling through all that Netflix had to offer, I figured I would give it a go.

Why did I wait so long? In a way, I’m pleased I did. I had seven seasons to binge on and now that I’m done, season eight is currently playing. Whoop! I will have to wait a while longer before it comes on Netflix, but I am patient. Sometimes.

Shameless is shocking. It is outlandish and filled with characters who you love but also hate because of some of the stupid decisions they make. You know, just like real people. I haven’t yet watched the Brittish version it is based on, but there’s always this year.

Fair warning though, there’s a clue of the content in the name. It is shameless.

Side note: What is it with Lip? He’s so damn hot!

The story of the impossible loves of 30-something obstetrician Nina Proudman and her fabulously messy family.

So the first season wasn’t great. The flighty-ness of Nina annoyed me. Her obsession with a man she barely knew annoyed me. I’m not sure why I kept watching but I am so glad I did. I identified a lot with the main character. Okay, I’m nowhere near as clumsy, and I don’t wistfully stare into nothingness and make funny facial expressions as I imagine various scenarios of the drama going on in my life, but when I accepted that it was all for comical appreciation and began to realise that what goes on in my head in a second, is what is being portrayed visually by the show, I was hooked. I laughed a lot. I also cried a lot. Ugly, desperate crying. Never has a death surprised and shocked me quite so much. Having aired its seventh season, I agree with those who think it is time to let the show finish. But in saying that, it was a great ride along the way.

Follows teenager Clay Jensen, in his quest to uncover the story behind his classmate and crush, Hannah, and her decision to end her life.

A lot of people thought this show shouldn’t air. A lot of people thought it was too graphic, went too in-depth, glamorised a delicate subject matter. I understand where they are coming from and agree that not all people should see this show. But for me, it gave me an understanding of suicide and what it might to be like to experience those feelings like I didn’t have before. It also left me heartbroken that so many young people could relate it to. What is has done is start conversations on the topic which are needed. Too long discussions about suicide have been swept under the rug. For me, it was an important show, but I understand how others viewed it differently.

There is a second season coming out, and I’m hesitant about it. I will watch it though. I will reserve judgement until I’ve seen it. But the way the show ended, with so many questions unanswered is the way I thought it should have been left, as it is in reality. 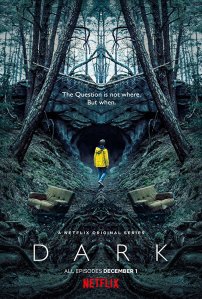 A family saga with a supernatural twist, set in a German town, where the disappearance of two young children exposes the relationships among four families.

People rave about Stranger Things and this show is like it, but in German and in my humble opinion, better. (I also loved Stranger Things.) So if you don’t mind reading subtitles or listening to voice-overs that don’t match the moving mouths, give it a go. I can’t really say all that much about it as it unravels slowly and I don’t want to spoil it.

The apparently perfect lives of three mothers of first graders unravel to the point of murder.

I lied before about not having favourites. I think this was my favourite. I bought the book, fully intending on reading it before the show came out, but then life (and an ever-increasing ‘to read’ pile) got in the way. In a way, I’m pleased I didn’t read it as then I would have known what happened.

I have never seen on a TV show a relationship portrayed like it was between Nicole Kidman’s and Alexander Skarsgard’s characters. It opened my eyes. It challenged my preconceived opinions. It had my friends and I discussing and analyzing each episode. It was amazing.

So there you have it. My most binge-worthy shows of 2017.

If you’ve watched any of these, I’d love to know what you thought, if you’ve got any recommendations, let me know!